What is a Specialist Restoration Tiler?

What is the difference between a restoration specialist tiler and a conventional tiler?

There are tilers who specialise in Bathrooms and others who have a real flair for kitchen flooring. And then there are others who have an uncanny ability to never turn up when they say they will.

At Were Tiling, we have always advertised the fact that we are a speciality tiler. But is that just a fancy title or is there something behind it? We call ourselves a specialist tiler because we specialise in a number of key tiling areas that few tilers can actually match. The most prominent is our tile restoration and repairing services which focus on Victorian, Edwardian and Georgian Tiling.

From period homes in Glasgow to Edinburgh, Newcastle and indeed so many Towns, Villages & Cities across Scotland and North England, the number of homes that feature original period mosaic & geometric tiled entrance ways that flow into Victorian tiled hallways, bathrooms and kitchens is simply staggering. Whilst the landscape of homes across the country has changed, with new build flats and housing estates popping up here there and everywhere, there remains a huge number of original sandstone Victorian Tenement Flats and sandstone Victorian Houses that feature these truly breathtaking mosaic tiled floors.

But as with so many things in your home, a low level of maintenance and care, heavy foot traffic and hard hits from heavy objects means that so many of these period Victorian and Georgian tiled rooms are suffering from neglect. And that is where we as a specialist tiler comes in. The restoration and repair of period mosaic and geometic tiling is our speciality. And we don’t just say that because we like doing it more than other types of tiling, we say it because we are fully trained, certified and qualified in the restoration and repair of Victorian Tiling, Georgian Tiling and Edwardian Tiling.

The level of care, patience and attention to detail that is required for the restoration and repair of tiled hallways that use a Victorian style and original Victorian period tiles (such as Minton Tiles) is more than a lot of conventional tilers are prepared to handle. And in the years since Were Tiling was founded, we have taken on a number of projects for new customer where they had originally hired a different tiler for the job, and then the tiler simply didn’t come back after the first day.  This is simply because the conventional tiler will only discover once they have begun a mosaic or geometric restoration project, that the intense care and precision that is required for this level of tiling job is far greater than they have either priced for or are prepared to offer their customer.  We are then called in because by this point, the homeowner, looking to have their original Victorian hallway restored is left living in a construction zone with no tiler coming back to finish the job.  And they now know that they need to call a specialist restoration tiler. 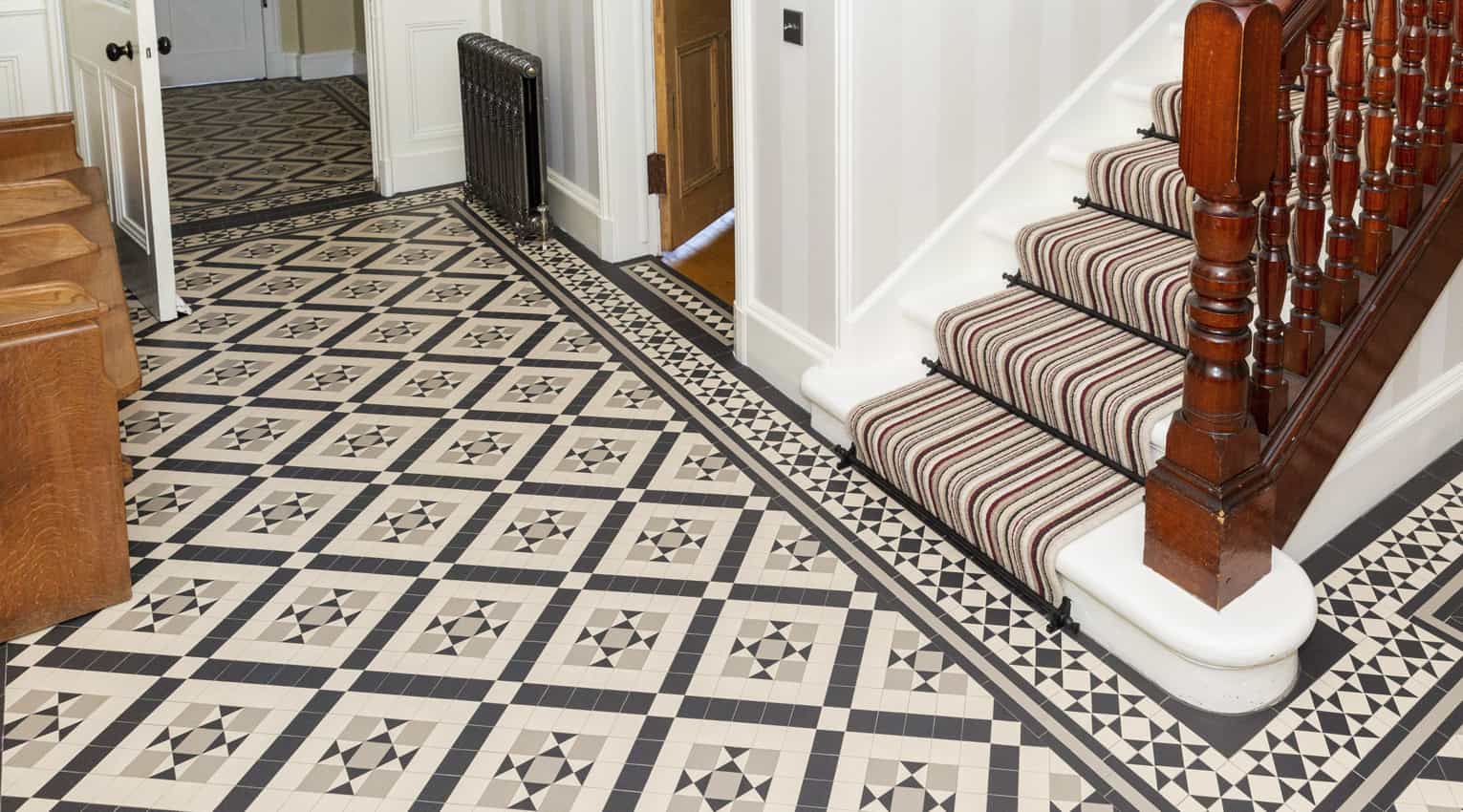 So when it comes to the tiling of Georgian Tenement Hallways, Victorian Bathrooms, Edwardian Entranceways or similarly styled mosaic pattern floors, we at Were Tiling truly are a specialist restoration tiler that can get the job done to the highest standards.

Call today to discuss your tiling requirements and we can answer any and all questions you have about Victorian Tiling.

What Our Customers Say

We were replacing a carpet in our hall and discovered the original Victorian tiling was still there. Andrew came to our home, looked at the tiling and gave us a quote with no hassle. His attention to detail and careful and methodical approach are clear in the end results. We are so delighted with the work that he has done. We never thought about having a tiled hallway but we are more than delighted with the results and it has increased the value of our home considerably.

We were looking for our Storm Door area and hallway to have a matching contemporary geometric tile design to them. We want a modern take that worked with our period Victorian home. Andrew was one of three tilers we call. He was the only one who took any measurements and really looked at the set up that we wanted. We went Were because they seemed to know what they were talking about and we were impressed with their detailed quote breakdown. It meant we knew exactly what to expect. And the end result - we could not be more happy with the end results. Our hallway looks better than ever.