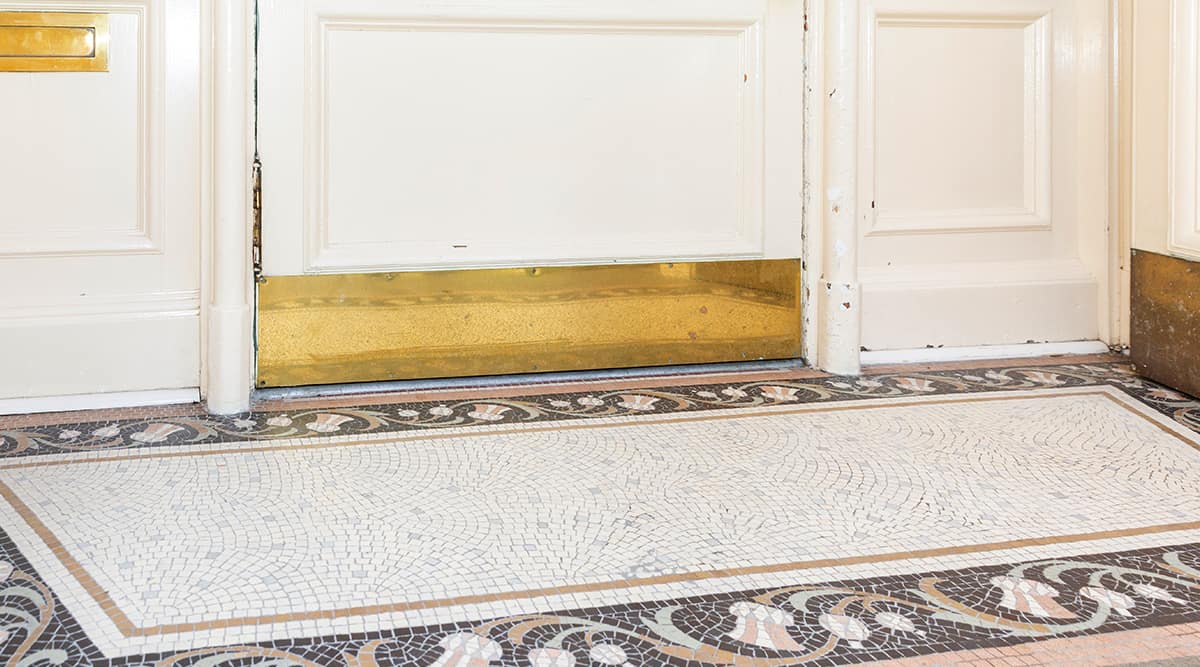 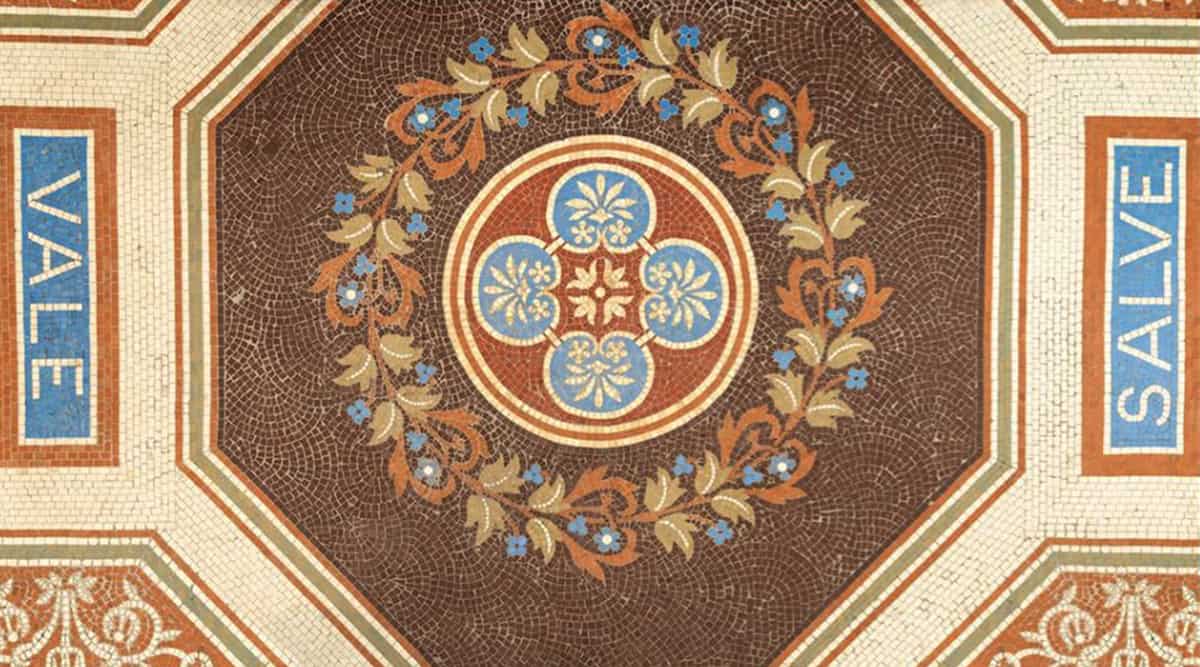 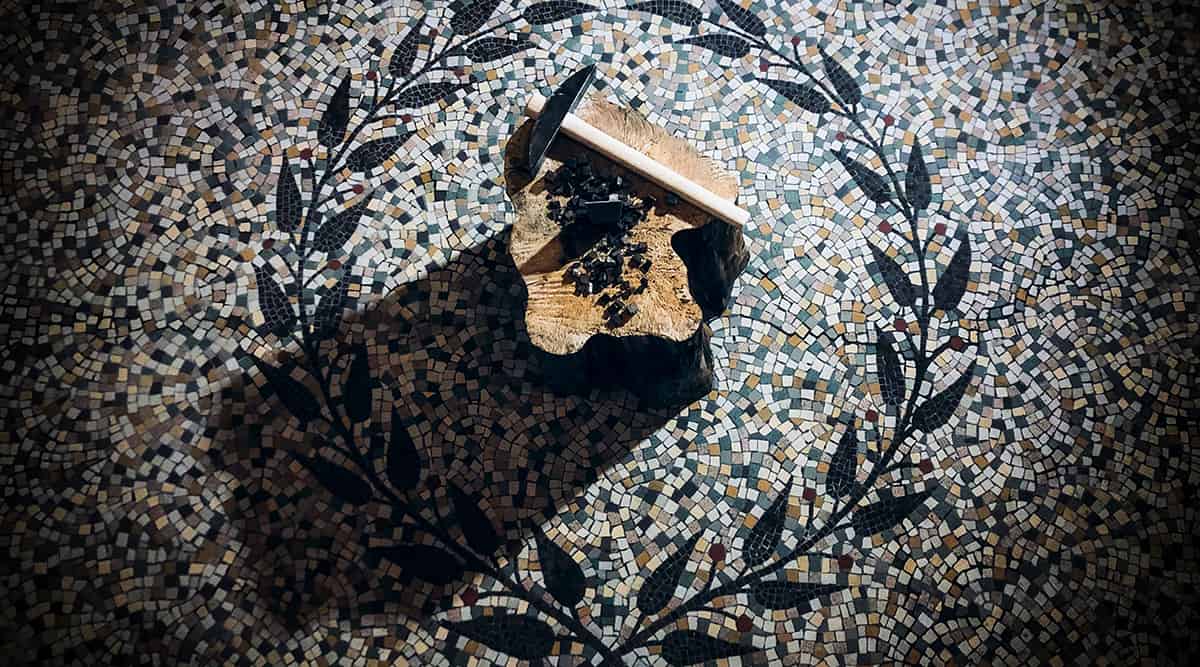 As with so many conservation tiling projects of historic floors across Scotland and England, original mosaic tiling is so often hidden and then found under carpets, tiles, vinyl, wood or underlay.

At Were, so much of our restoration tiling work comes from these types of tiling discoveries. It is a bit like a ‘barn find’ in the world of classic cars.

How can I tell what state the original mosaic tiling is in?

Often with tessellated, tesserae mosaic tiled floors, they are usually found on a more solid mortar beds than geometric floors from the same period. Where the initial Statumen (a bedding of fist sized stones or slabs) lies compressed on top of the ground soil. Rather than a rudus, (a mix of rubble and lime or sand cement) placed on top of floor boards directly placed on top of joists.

This gives the subfloor of Mortar beds much more stability and the capability to be able to absorb and displace movement and settlement within the building. Usually at most you will find a structural movement crack travelling through the Mosaic design but it often does not displace, loosen or damage the tiles.

All substrates from this era were poured in a few stages, much in the same was they were in Greek and Roman Times. With a Statumen, Rudus, Nucleus and setting bed, these are Roman Terms that have been found in architectural books of the classical era. The Statumen is a bedding of fist sized stones or slabs, followed by a rudus, which is a mix of rubble and lime or sand cement beaten solid to a thickness of around 9 inches. Then the upper layers, a finer mortar mixed with three parts of crushed tiles, slate, ceramic and brick, again mixed with lime or sand cement. Then lastly, the setting bed, this is often various depths and this is usually where the two layers become detached from the each other.

How do we tackle a mosaic tiling restoration project?

With any conservation project, we start by removing the original mosaic tiles from the damaged area so we can analyse the substrate. As mentioned previously mosaic mortar beds are more dense and solid than their geometric counterparts. So at this point we grind down the mortar so that the new tesserae can be installed flat and flush with the original mosaic tiles. We can then send the original tiles away to be matched by our supplier in London. Tracings and drawings of areas of repair are made so we can start cutting and making the mosaics to be installed. Then the cleaning can commence.

We do all our tile cleaning with a combination of Machine and hand cleaning. Using specialist floor machines, combined with diamond cleaning pads that only require water, although we do occasionally use cleaning products depending on the state of the floor. Once the floor has been stripped and cleaned. The floor is left to dry for 7 to 14 days. This is to let the base dry out and any efflorescence (salts) come to the surface of the floor. Once the base is dry we return to colour intensify and seal the floor. This can be burnished with either a Matt finish, which leaves the floor in a more natural state. Or we can seal the floor in a wax coating. This is a more traditional way the floors were probably originally finished, although this finish does require more maintenance.

What makes Were Tiling unique?

At Were Tiling, we are a Specialist Tiler. And that is not just a fancy title. It is a title that reflects that we are properly trained and are qualified to work on the restoration of original Edwardian, Victorian and Georgian Mosaic Tiling across Scotland and England. So, as you can imagine, we know a thing or two about the history of not just the tiling but also the styling.
Design and Architectural movements constantly evolve and British history has seen some truly brilliant design examples that fall into the three main categories that we refer to as Georgian Era, Victorian Era and Edwardian Era.

First off – Georgian. The Georgian Era lasted between 1780 and 1820. Influenced predominantly by Roman Architecture, it featured symmetry and proportion. An example of the simple symmetry of Georgian design can be seen outside 10 Downing Street which features iron railings with elongated spikes heads and simple urn heads on every twelfth railing bar. This creates a balanced symmetry. The Roman roots of Georgian style can be seen in the colour pallet of the period which included lavender, pink, pea green and light blue. When it comes to the floor tiling, the geometric symmetry of Georgian floor tiling included popular options including octagon based patterns, chequered boards and Roman style geometric micro mosaic features.

Victorian Style – The Victorian Era featured a mixture of medieval and renaissance that generally involved highly elaborate detailing. This detailing can easily be seen in so many Victorian mosaic tiling patterns. Victorian tiling styles changed depending on whether you were indoors or outdoors. Black and white checkerboard patterns with a bordered row of diagonally set square tiles would be a common style for exterior tiling while indoor Victorian tiling for the likes of a hall floor would feature encaustic tiles at the intersections of the lattice element of the field in an overall design that featured a lot more elaborate pattern and colour use. Tiling was not limited to floors in the Victorian era. This was a period when sizeable mantle pieces became more popular and this in turn created demand for tiled fireplaces. Commercial Premises would often feature tiled entrances that incorporated the business name and or logo along with floral detailing.

Edwardian Style – While there is some debate about when the Edwardian Era ended, we generally classify it as between 1901 and 1914. Edwardian style took influence from Georgian and Medieval era. Simpler patterns laid out on larger tile sizes replaced the more complicated Victorian style whilst the colour pallete was commonly earthy browns, reds and yellows along with blacks and whites. And while Edwardian tiled flooring was still a popular architecturally decorative choice for so many houses, there was a new wave of home owners who were moving away from tiled hallways and flooring, replacing them with wooden flooring and Edwardian patterned rugs on top.

From our home in Glasgow, we cover all of Scotland and the North of England for mosaic tiling restoration projects. So whether you want to restore the fantastic period tiling of your home or you wish to replicate the stunning designs of yesteryear in a new kitchen, bathroom of conservatory, call on Were Tiling today.

What Our Customers Say

We were replacing a carpet in our hall and discovered the original Victorian tiling was still there. Andrew came to our home, looked at the tiling and gave us a quote with no hassle. His attention to detail and careful and methodical approach are clear in the end results. We are so delighted with the work that he has done. We never thought about having a tiled hallway but we are more than delighted with the results and it has increased the value of our home considerably.

We were looking for our Storm Door area and hallway to have a matching contemporary geometric tile design to them. We want a modern take that worked with our period Victorian home. Andrew was one of three tilers we call. He was the only one who took any measurements and really looked at the set up that we wanted. We went Were because they seemed to know what they were talking about and we were impressed with their detailed quote breakdown. It meant we knew exactly what to expect. And the end result - we could not be more happy with the end results. Our hallway looks better than ever.

You can find out more about which cookies we are using or switch them off in settings.

This website uses cookies so that we can provide you with the best user experience possible. Cookie information is stored in your browser and performs functions such as recognising you when you return to our website and helping our team to understand which sections of the website you find most interesting and useful.

Strictly Necessary Cookie should be enabled at all times so that we can save your preferences for cookie settings.

If you disable this cookie, we will not be able to save your preferences. This means that every time you visit this website you will need to enable or disable cookies again.